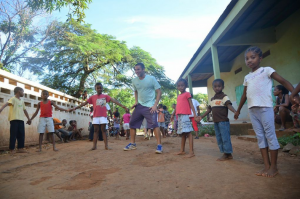 Why did you accept to follow Marlène Zumba’s project ?

I’ve been all around the world and visited many countries. This was my first trip to Africa. Like many Canadians, I’ve heard about, researched and imagined what life is like in a third world country but didn’t have a purpose to go and visit. Marlene’s idea to go and give Zumba classes for the kids was brilliant because we could explore a new world, while sharing something we love with a newcommunity. It was amazing to see how something so simple could create such an impact.

This was truly the voyage of a lifetime. Returning to my home base in Miami, I am re-energized and inspired. It was such a blessing to dance with the kids of Coeur et Conscience and while teaching them, we learned so much ourselves. Marlene and I are already planning our next trip to Diego Suarez.

Why did you decide to sponsor a child after your journey ?

To be honest, I went to Madagascar not thinking to sponsor a child ; however, the moment I saw and FELT the impact of Coeur et Conscience on the child, family, and community, I wanted to get involved with this amazing organization.

According to you, why this sponsorship is important for the child ?

By spending time with children Davinot’s age (3 1/2), it is evident that this is a critical moment in his life. By starting school this year, he will be given more opportunities to grow and develop in a better way than if he were to start working or stay at home during the day.

What did you feel during your first meeting ?

Davinot was very shy at first. He is very engaged and aware of the things going on around him, but observes from a distance. He warmed up to us very gradually (“mora mora” – it’s a phrase common used in Madagascar to say”take your time”, “slowly slowly” ) as we spent time at his house. He is just like any other kid in the world at 3 1/2 years old. He loves to play and shows huge potential for a bright future. I will think about him every day.